Not long after Aaron Hall was named lead developer for Continued’s sister company, Simucase, he and his wife made a life-changing decision that would give a whole new meaning to the words "home office."

Within three months of leaving the traditional office setting behind for the virtual workplace, Aaron and Hayden Hall sold or donated nearly all of their possessions, purchased a recreational vehicle (RV), and began traveling the country.

Nearly three years later, the couple has covered almost 17,000 miles, 31 states, and 31 national parks. With each mile of the journey, Aaron’s office has traveled with him as he leads the Simucase development team.

The Halls always shared an interest in living small—one of their first conversations was about tiny houses and shipping container homes—and they also share an insatiable appetite for travel.

They were intrigued by the idea of living in an RV full time, which would combine these two interests.

After moving from Washington state’s San Juan Islands to Portland, Oregon, and then to Austin, Texas, over the course of three years, the couple’s desire to live more simply intensified.

During a camping trip in 2016, the Halls solidified their decision to pursue full-time RV living. Aaron was settling into remote-work life at Simucase, and Hayden had already made the remote work transition, giving the couple all the flexibility that virtual work affords without geographical constraints.

“We were sitting by the fire and talking it over, and we realized that every day could be like the day we were having if we moved forward with this plan,” Aaron said.

They spent the next two months preparing for life on the road, downsizing from a 2,200-square-foot-home to a 200-square-foot RV. They took pictures of sentimental items before getting rid of them, rehomed family heirlooms, and sold or donated nearly everything else.

Sharing in their new home-on-wheels would be their dog, five cats, and a pet chicken, along with Aaron’s teenage daughter, who joins them during the summer and on school holidays.

“Although we are working every day, I feel like we are perpetually on vacation.”

A big factor in their planning is how they would maintain their careers and successfully work while traveling across the country.

Aaron first spoke with his boss, who supported his plans to take his office on the road as others in the company have done through the years.

As part of an extensive RV renovation, they removed a bed in order to set up an office space for Aaron. Although they aim to stay in places with reliable WiFi, he knew he couldn’t solely depend on this and purchased hotspots for three of the country’s major cellular companies. Even still, he’s resorted to working from nontraditional places, including a Burger King parking lot, when service is scarce.

“Although we are working every day, I feel like we are perpetually on vacation,” Aaron said. “With the flexibility of working for a 100% remote company, I am always in a new place and always experiencing something new, seeing new terrain, visiting new national parks, and really living life to its fullest.” 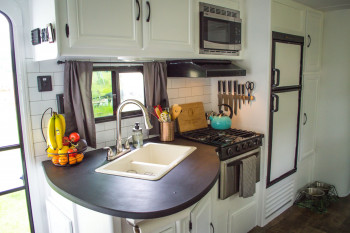 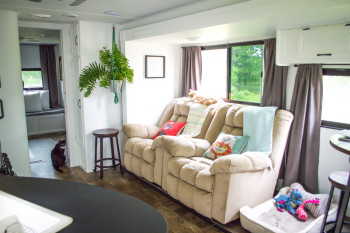 “With the flexibility of working for a 100% remote company, I am always in a new place and always experiencing something new, seeing new terrain, visiting new national parks, and really living life to its fullest.”

VEGAN VARIETY FROM COAST TO COAST

The Halls blog about their travels, RV living, and another love–veganism–under the name Vegan Voyagers. Tireless animal rights advocates, Aaron and Hayden hope to use their platform to dispel the myth that it’s difficult to eat vegan while traveling.

Since starting the blog, they have eaten at and reviewed nearly 200 restaurants nationwide with vegan fare.

“Many people think it’s hard to travel and eat vegan, so we wanted to show that no matter where we are, we are almost guaranteed to find something to eat,” Aaron said. “So far everywhere we’ve traveled, we’ve never been more than a 20 minute drive from a good vegan option.”

Aaron says he credits the company culture at Continued and Simucase for the ability to work while traveling the country.

“This company makes me feel comfortable and confident, not only in my professional life but in my personal life, and I don’t feel like my travels are looked down on by anyone in any way,” Aaron said. “Since joining the company, I’ve become a champion for the culture that is well-established here. The company’s commitment to its remote workforce allows us all to have such freedom to do whatever is important to us, which in turn makes us happy and productive employees.”

"The company’s commitment to its remote workforce allows us all to have such freedom to do whatever is important to us, which in turn makes us happy and productive employees.”

Aaron and Hayden plan to spend a few more years in the United States before selling their RV to begin extensive travel abroad. They have already rehomed their chicken, their dog, and two of their cats to family and friends and will continue to rehome their pets in preparation for this next step of their journey.

“A predetermined plan to follow is often ingrained in all of us from a young age—find a job, get married, buy a house, have kids, and so on,” Aaron said. “Breaking away from that predetermined plan has been incredible and completely changes your worldview. Living and working full-time in an RV is not for everyone, but we love this life and have no plans of changing anytime soon.”

Decade of service to Continued and Simucase ‘not just a job but a passion’...

'Family not a loose term' for CEU administrator of Continued's PhysicalTherapy.com...